How secure do you feel in your job? With the looming economy and unemployment levels peaking, do you sometimes feel a little anxious about how secure you are in your current position? With this in mind, do you 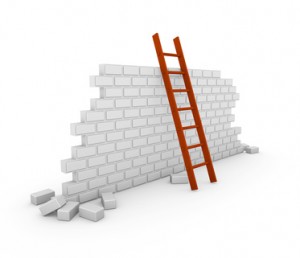 think that leaving your career in the hands of destiny alone, is such a good idea? You need to be vigilant and make a concerted effort to keep growing and moving up the ranks… Several decades back, employees were rather content to stay with the same company for the span of their entire career. I for one have a relative who started out as a type-writer mechanic and by the time he left the same company 40 years later, retired as a director. Today however, things have changed and research shows that some employees are willing to leave their job for a pay raise of 20% or less. When I started my career in the recruitment field some 20 odd years back, majority of people stayed within a company for at least 2 years, now, the norm seems to be job-hopping to chase that bigger salary cheque! Having said that though, the higher up the ranks one goes, the less important that salary cheque becomes. Other factors start taking precedent like career aspirations, promotional potential, fringe benefits, work overload and the ability to maximize your overall learning curve and ultimately growth within your field of expertise. MAKE AN EFFORT It’s important that you be seen as an asset within your organization, someone who provides a positive input and who would be missed if you left. Now, no-one is indispensable but, you get my point here. The job market is a competitive environment and everyone is looking out for number one, so do your very best to shine! Put in the necessary over-time to ensure that the job you have been given, is done to the very best of your ability. Offer to take on extra tasks and volunteer your time to take on a new challenge. Don’t shirk your responsibility by taking extra long lunch breaks/coffee breaks and smoke breaks – be seen to be diligent and responsible and before long, this will be noticed and you will be seen to be the most proficient person around, speeding up your chances of being promoted. One thing you need to remember – you and your employer have very different agenda’s! Yours is to ultimately GET as much as you can from your company and your employer is trying to optimize your performance to GET as much as they can from you! When the two merge, that’s where success happens! NETWORKING Networking is key to get yourself known and be known. When a new position becomes available, your name needs to come to mind as the top person for the job. Develop your networking skills and hone them to a fine art. Strategically associate yourself with individuals in high positions in order to further your career. Attend those corporate functions (even if you don’t want to) in order to get yourself known in the industry. THE NEXT STEP The next step here is to identify where you want to be – focus on your goals and put together a proper career path as to how you plan on achieving them. I have a vision board which is placed in my office. It reflects exactly what my goals are for the coming year and I am reminded of them every time I enter my office. (it is strategically placed so it’s hard to miss!) The key here is to take authority, or rather, act as though you could be the next boss. I am a great believer in positive re-enforcement. What you believe, will manifest in your life – whether it be positive or negative. Don’t put limits on what you can achieve – you really are the master of your own destiny so, take command of your life and start moving in the right direction. Although I’m not one to punt competition amongst colleagues, the reality is, we do live in a very competitive world where no-one will step aside to help you get that well deserved promotion, especially when they too have been planning to get that very same promotion as you! So, take advantage of opportunities and act quick! Nothing will be handed to you – you will need to put in the effort and persevere to get what you strive for. ACT, DON’T PROCRASTINATE Take the initiative and impress! When given a task to do, do it! Don’t waste time procrastinating. In this country, our service levels are atrocious to say the least. We have become a nation who accepts poor, incompetent service as our benchmark is set so low. Why should we accept this – take the initiative and do your job properly the first time round. Just because everyone else puts in a minimal effort, doesn’t mean you have to follow the norm. Stand out from the crowd and make a difference! And, remember, “WE ARE A RESULT OF WHAT WE THOUGHT!” So, be sure to think big and don’t set limits on what you can achieve!